No two snowflakes are alike, fingerprints and DNA are essentially unique. These analogies come to mind when I think of how to describe flatpicking styles. Two guitarists of roughly equal ability might sound similar in their output, but duplication is practically impossible (nor desirable) .

Style is created by influence and then by output. All musicians listen to music before they create their own. They choose what appeals to their "earbrains" and use that as a base for what they create. An individuals skill dictates and more often than not limits what they are able to physically create (this often being a motivating factor for improvement through practice) and it is through this deficiency of technique that styles develop.
Imitation is inevitable, as a developing player tries to create what they have heard which they liked, however in doing so, their own unique abilities and deficiencies in technique create a sound in which influence is apparent, but has gone through a metamorphosis as a result of that uniqueness!

Enough about the mechanics of style - hopefully I have distilled the process into something understandable and useful to both beginners and more advanced players. In future posts, I will write about the three cornerstones of flatpick guitar...Doc Watson and Tony Rice in Bluegrass, and Django Reinhardt in Swing. It's interesting how the two genres have co-influenced each other as evidenced by the best Bluegrass flatpickers of today's era, David Grier and Bryan Sutton. 'Till next time.

BTW, my style appears on my website, accessible through my profile.
Posted by Flatpickit at 2:28 PM 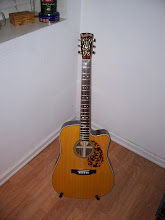